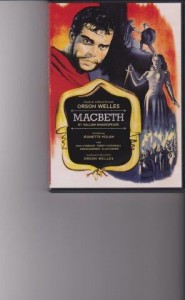 The version of Macbeth that nearly everyone remembers is Polanski’s with the ‘gross’ severed-head ending. It certainly is the sensuous and ‘glandular’ Macbeth which revitalized this classic for a lot of readers and filmgoers. Earlier in this blog, I reviewed Kenneth Branagh’s very interesting version staged and filmed live in a church. It is easily the best live play version of this play ever committed to film. But what of Orson Welles’ 1948 version, long-forgotten and mouldering, waiting for a decent restoration? Now thanks to Olive Films, we can see and hear Welles’ take clearly, without technological distractions and flaws.

Welles not only starred in this version but directed as well. The first thing to be said in the film’s favor is that all the actors speak with Scottish accents. To critics and North American viewers of Welles’ day, this was off-putting and doomed the film for the wider general public. Personally, I found the language easy-to-understand and follow. If anything, Welles makes one savour and feel the words; for instance, Macbeth says in “blood steeped o’er” instead of “stepped o’er” as in often done in productions.

His own performance is suitably haunted-looking; he is uneasy and anxious from start to finish, conveyed mostly by his voice, face, and eyes. Jeanette Nolan as Lady Macbeth is given lots of room to bring out the range of her character, mostly noticeably in the sleepwalking scene. The other supporting actors are reasonable, and the non-Macbeth scenes of the doctor with the maid and the Macduff ‘conversion’ to revenge turning point are allowed to play out in reasonable fullness.

Although Welles shot in the Republic studio with minimal scenery, he manages to give a primitive, yet haunted ‘otherworldly’ look to the sets and settings. The black-and-white photography also helps to create more focus on the speeches, actors, scenes, and stories. Welles does move some lines and speeches around and in some cases moves actors into different scenes; for instance, Macbeth is first on the scene for the Macduff slaughter. The witches are seen effectively at the beginning and their words are echoed elsewhere including the weak ending which just has them simply commenting that the charm is wound up.

As previously mentioned, there is a primitive visual look to the entire production. Welles wears headgear suggesting Taras Bulba or Genghis Khan, but given the Macbeth plot was taken from early Scottish history, I suspect that Welles (who was very conscious and meticulous about the effects of detail) probably derived this choice from actual early Scottish illustrations.

This DVD version from Olive Films deserves another big thanks for restoring the long-lost 18 mins. and restoring the film to its full 107 minutes. Welles’ faithfulness to the original play detail (notably via the accents and costumes) in this production amazingly shot in less than a month (!) is typical of the high standards and results he always generated despite low budgets and typically numerous other obstacles. The DVD is also recommended for students or first-time seers who want to view a production closer to the one that was likely produced originally at the Globe Theatre in Shakespeare’s time as well as for those who want to check out the interesting seamless changes Welles made to the script that help to create a very unique take on this deservedly famous tragedy.