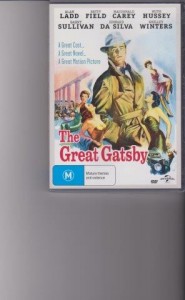 Long unavailable for viewing, a print of this classic showed up in 2012 and has now been released on DVD in a nice restored print. There are many good things about this adaptation which closely follows F. Scott Fitzgerald’s book until after the auto accident. All the main scenes of the book are retained and there are three flashbacks (not in the original novella) which provide exposition about Gatsby’s youth, his meeting with Daisy and Gatsby’s reaction to news of her marriage.

Alan Ladd makes a credible, attractive Gatsby, moreso than Leonardo, for instance. Macdonald Carey embodies all of Nick Carraway’s naivete and loyalty. Barry Sullivan is also good as Tom Buchanan. Ruth Hussey is more convincing than Mia Farrow as Daisy. Strangely, the Buchanans are given repentant moments unlike the book. And the movie cops out from Fitzgerald’s handling of Nick in the finale, giving him an unexpected happy ‘romantic’ ending.

There are also a number of old second-banana actors in supporting roles including a slim Shelley Winters as Wilson`s unfaithful wife, Howard da Silva as her frustrated husband, Ed Begley as a variation of Meyer Wolfsheim (the Wolfsheim-Gatsby scene was left out possibly to avoid anti-semitic stereotyping). and Elisha Cook, Jr. as Klipspringer, who is given a bigger part to play than in the original. Interestingly, Dr. Eckleburg and Wilson are compared in passing, but that`s about it for symbolism in this movie (shot in black and white so no symbolic green light).

This is a must-see film for any fans of the book, and viewers variously disappointed by the Redford and diCaprio versions. Alan Ladd was s likable actor and having another of his lost gems (c.f. the restored This Gun for Hire, reviewed earlier here) is a real treat. (Safe for viewing by teenagers despite the Mature warning)