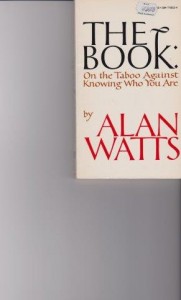 “The only way to make sense out of change is to plunge into it, move into it, and join the dance.”

I don’t think there’s anything more satisfying than going to look for a vital, once-influential piece of your life, and finding it, as I did just now looking for an old 1966 book on my non-fictional bookshelf in the basement.

The book was by the British-born Alan Watts who came to America to articulate Eastern thought about the time Maharishi and Ravi Shankar were having their moments with young Western audiences. Its intriguing title ensured its attraction: The Book: On the Taboo Against Knowing Who You Are.

Imagine the random, natural, ubiquitous appearance of Nature and the world (sans any human-designed structures) as wiggles or wiggly line shapes having an apparent arbitrariness and chaos about them seen a certain way by the human eye. Now imagine imposing a net or graph organizing and pigeonholing the same random wiggliness or any wiggliness of your choice.

Watts: “The net has become one of the presiding images of human thought. But it is always an image [I would add “impression” or “appearance”] and just as no one can use the equator to tie up a package, the real wiggly world slips like water through the imaginary [my italics] nets. However much we divide, count, sort, or classify this wiggling into particular things and events, this is no more than a way of thinking about the world: it is never actually divided.”

In other words, whatever order we see or imagine, is just that: a subjective, human-imagined overlay of structure, an imposed illusion, differing from and not necessarily accurately representing that which we see or are looking at.

In that quote/description/explanation/metaphor, the entire gist of human experience, life, and the relative failure of reason/the rational mind to organize the world and human life into any predictable, hard-and-fast way, to roll the universe into a ball, as Prufrock did, or as Einstein, Hawking, and many artists have tried to do. This speaks to how random, arbitrary, and constantly changing all things (including people and the external world) really, essentially are.

People often try to find cause-effects or conjure rational explanations, as Alice did in Wonderland, but flamingoes are not mallets and hedgehogs are not really balls in some imagined human game or desire. They are what they are, much as the universe, Nature, and people are what they are. All of these are fundamentally uncontrollable, non-pigeonholable, and unnettable.

Thus, Life, Nature, and people simply cannot be ‘netted’, no matter how brilliant or clever be the human designer or thinker. Wiggly and wiggliness are normal or natural. That is why things often ‘act up’ or people can’t control themselves 100%. Whatever scheme or plan has a good likelihood of running off the rails in the face of this much different/differing reality. And as a Buddhist would say, This is just the way it is, the way things are, and we should get used to it or accept the natural, at times seemingly fated, flow we experience.

Having said all that, it is ‘nets’ that artists cast and have cast over our wiggly world which remains truly interesting. Think of Beethoven bringing out unique soulful possibilities of musical notes and tones. Ponder the amazing talent of Frank Lloyd Wright and his beautiful resplendent buildings and homes blending in with their various contexts. Consider how Rodin or Henry Moore amazed us with their work in stone. Recall the sensation that Orson Welles’ Citizen Kane made when it revolutionized film. And remember how van Gogh has thrilled us with his use of color as he tried to capture the odd, puzzling flow of his desires, human life and Nature in his time.

And so it is that I continue in my own ways to play with the possibilities of wiggly language, trying to net various subjects that present themselves as worthy of being noted, celebrated, remembered, understood, appreciated, or empathized with. Netting, finally, is potentially the great human preoccupation or creative vocation in which one person can capture some of the essence and spirit of some parts of the greater wiggle world and life.

It is, thus, that we bring civilization, order, and some degrees of permanence, pattern, design, Beauty, and Truth to the ever-changing flow and mix of disparate, wiggly elements. I am, if nothing else, a recurring and ongoing netter-facilitator “constantly risking absurdity” as Ferlinghetti opined about the risks of the writing life. Creating what Frost called “momentary stays against confusion”. Much of this, then, defines me, my life, and main purpose. These net affects/effects.