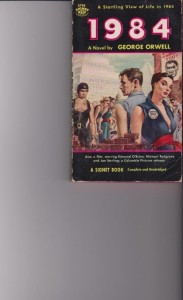 George Orwell, author of Nineteen Eighty-four, forecast many things that have become truths and truisms today. Here are some quotes from that book and others by one of the most unappreciated authors of the twentieth century:

The essence of being human is that one does not seek perfection.

At 50, everyone has the face he deserves.

Happiness can exist only in acceptance.

Of pain you could wish only one thing: that it should stop.

Reality is inside the skull.

Reality exists in the human mind and nowhere else.

Nothing was your own except the few cubic centimetres inside your skull.

To see what is in front of one’s nose needs a constant struggle.

To think, to think, even with a split second left–to think was the only hope.

Until they become conscious, they will never rebel.

Orthodoxy means not thinking–not needing to think. Orthodoxy is unconsciousness.

Perhaps a man really dies when his brain stops, when he loses the power to take in a new idea.

Doublethink means the power of holding two contradictory beliefs in one’s mind simultaneously, and accepting both of them.

If both the past and the external world exist only in the mind, and if the mind is controllable–what then?

The consequences of every act are included in the act itself.

Freedom is the right to tell people what they do not want to know.

Early in life I noticed that no event is ever correctly reported in a newspaper.

There was truth and there was untruth, and if you clung to the truth even against the whole world, you were not mad.

The very concept of objective truth is fading put of the world. Lies will pass into history.

The most effective way to destroy people is to deny and obliterate their own understanding of their history.

In a time of deceit telling the truth is a revolutionary act.

Myths which were believed in tended to become true.

Advertising is the rattling of a stick inside a swill bucket.

All issues are political issues.

The opinion that art should have nothing to do with politics is itself a political attitude.

Political language is designed to make lies sound truthful and murder respectable and to give an appearance of solidity to pure wind.

Power is inflicting pain and humiliation.

Power is tearing human minds to pieces and putting them together again in new shapes of your own choosing.

If you want a picture of the future, imagine a boot stomping on a human face–forever.

The power is not a means; it is an end….The object of power is power.

Big Brother is Watching You.

Within certain limits, it is actually true that the less money you have, the less you worry.

Perhaps one did not want to be loved so much as to be understood.

If you loved someone, you loved him, and when you had nothing else to give, you still gave him love.