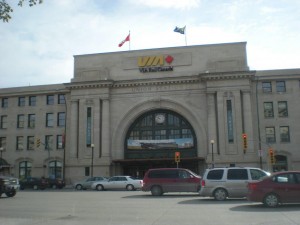 (Union Station–built 1912,one of the few grand buildings left standing in Wpg.)

Like a pot of dry geraniums
in a North-End wartime window,
you cling to life though
your halcyon days are done.

Oh Winnipeg, your history is dead now.
Who remembers the Strike, the Blizzard, floods?
Who remembers your Indian Jack,
Gisele MacKenzie, Lenny Breau?

Nothing else remains
but second-hand stores on William
selling spurs, quilts and memories
that no one really needs.

pot of geraniums–allusion to John Marlyn’s 1957 novel Under the Ribs of Death, about a Hungarian-Canadian’s struggle for survival in Winnipeg’s North-End during the Depression

Strike–the famous General labor strike in the summer of 1919

Blizzard–which paralyzed Wpg Mar. 4, 1966; nothing was running and the city shut down

Gisele MacKenzie–popular Wpg. singer who had her own American tv shows in the ’50s and ’60s

Lenny Breau–legendary jazz guitarist, considered to be the all-time best by many fans; mysteriously killed in L.A. in 1984

Riel–Metis hero; a sculpture-monument facing the Assiniboine River near the legislature is dedicated to him

Golden Boy–famous statue on top of the legislature, signifying prosperity

Hull–aka the Golden Jet, first superstar of the Wpg Jets, who signed the 1st million dollar contract in professional hockey, playing from 1972-79