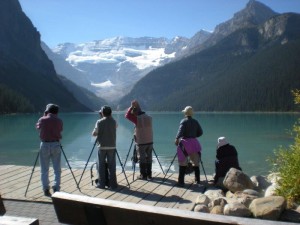 (above: Lake Louise. Sometimes only photography offers the closest means and technology to ‘capture’ and express whatever Nature is experienced in person)

There are places and scenes which one cannot hope to do justice to in words. I know well the limitations of word when describing Nature. Earlier I did an entry (Oct. 2, 2013) comparing the natural sculptures of the Mingan Archipelago to those by Henry Moore. The similarities were, I thought, obvious and with minimal imagination I was able to render some interaction between the former and the latter. The poem was both possible and worked. Such a process and poem was only possible, though, because of my sensibility and imagination, the latter two preceding expression and poem.

But some scenes are just what they are and simply knock you out with their pristine or wild beauty. The only way to record these is to have an Olympus digital camera like the one Michaelhdavies used to record most of what’s on this particular Frame channel program. One views the unique splendors of this national park and just says “Wow!” The Frame channel can be that way sometimes, particularly the Canadian parks programs, and especially, the ones of northern parks.

Of course, you’re missing the 5 other senses which can only be experienced in person of sound, taste, smell, feel, and temperature. But as facsimiles go, yes, only good quality photography and nicely chosen pictures can do justice to these places. Words will never suffice or hope to replicate such wild glory.

That said, I remain impressed by what writers like Frost, Wordsworth, and Keats were able to accomplish in such poems as “After Apple Picking”, “Tintern Abbey,” and “Ode to Autumn”. Proving that, when a writer or poet has something to say that is inspired by Nature, great poems or writing are invoked and expressed. In passing, if you reread those three poems, you will experience all 6 senses (temperature being the 6th) which communicate the beauty of those inspired moments and writings.