Much of what passes for human speech in social situations… 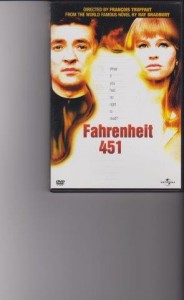 (Books, reading, solitude, nonconformity, and ‘dropping out from the herd’–all highlighted in Bradbury’s famous book and Truffaut’s appealing movie–are all good, valid alternatives)

…is mere babble often with no significant meaning or content. (This effect is often accentuated by such stimulants as coffee, alcohol, or drugs.) Some of the babble is strictly arising from others, even complete strangers, for instance, in a grocery store, stopping one to hold them captive so they can talk–Ancient Mariner-style–at someone, often just to hear their own voice or to control someone else.

One of the principal reasons why I ‘dropped out’ of society in 2002 and again in 2010 was to be free of this often-forced babble and having to be forced into being on the receiving end of a lot of babble that didn’t simply interest or concern me, and wasted huge amounts of my time and personal life. Often this babble was inconsequential, pointless chatter, agendaed prattle, or party-line gossip revealing the madness or palpable weaknesses of others more than anything.

Sometimes solitude or ‘leaving the herd’ is viewed as aberrant behavior or some kind of major defect and failure, but I’ve always found that it clears one’s mind and allows one to see things more clearly.

Incidentally, much of the new e-media or d-technologies reveal this human penchant for babble. A complete stranger will be standing beside one in an elevator shouting into a cellphone, inflicting their limited emptiness and ego onto others in a social situation. I don’t need this; no one else does. We are perfectly entitled to the sanctity of our own thoughts and preferences without having people who are clearly ‘not together’ foist their limited/limiting selves and worlds on others.

Increasingly, in this declining, purposelessly-deconstructed time, I find a great dumbing- down in many areas and a significant lack of positive, thoughtful, growth-oriented discourse, content, and subject matter. Much to do about nothing in particular. The true art of conversation requires more than a motor-mouth on automatic laying trips on others. Properly speaking, it is a thoughtful exchange seeking real connection and reveals an empathy that knows when to shut up and listen, not dominating and paralyzing. There are many more people on this planet than just one’s ‘untogether self’.

“They almost hear a meaning in their noise.”–Thom Gunn, “On the Move”