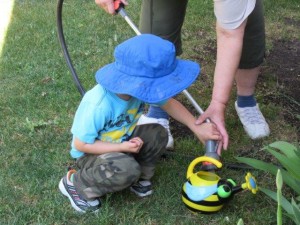 “A child’s world is fresh and new and beautiful, full of wonder and excitement. It is our misfortune that for most of us that clear-eyed vision, that true instinct for what is beautiful and awe-inspiring is dimmed and even lost before we reach adulthood. If I had influence with the good fairy who is supposed to preside over the christening of all children I should ask that her gift to each child in the world would be a sense of wonder so indestructible that it would last throughout life, as an unfailing antidote against boredom and disenchantments of later years, the sterile preoccupation with things that are artificial, the alienation from our sources of strength.”
–Rachel Carson

“I went to the woods because I wished to live deliberately, to front the essential facts of life, and see if I could not learn what it had to teach, and not, when I came to die, discover that I had not lived.”
–Henry David Thoreau

“The battle for conservation will go on endlessly. It is part of the universal warfare between right and wrong.”
–John Muir

“When we see land as a community to which we belong, we may begin to use with love and respect.”
–Aldo Leopold

“if…we can live without goose music, we may as well do away with stars, of sunsets…”
–Aldo Leopold

“[A]…singular aspect of the wilderness is that it gratifies every one of the senses.”
–Robert Marshall

“The enjoyment of solitude…and the beauty of undefined panoramas is absolutely essential to happiness.”
–Robert Marshall

“Though men now possess the power to dominate and exploit every corner of the natural world, nothing in that fact implies that they have the right or the need to do so.”
–Edward Abbey

“In recording my impressions of the natural scene I have striven above all for accuracy, since I believe that there is a kind of poetry in fact.”
–Edward Abbey