My Afternoon with Richard 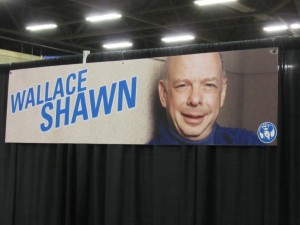 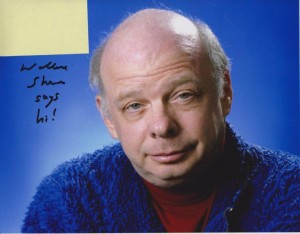 (signed for my daughter and her companion–“Are those your kids?” he asked) 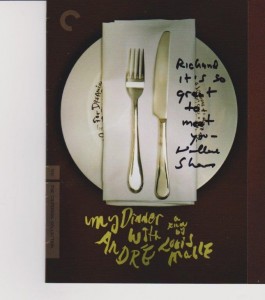 There are very few people I would leave home for these days, braving the crowds of major comic book convention at Northlands no less. I would have had no other reason to go.
But there he was in the Journal this morning; I was totally unaware that he was going to be in the city today signing autographs at the convention.
Wallace Shaun, 72 and more than intact in his 5-footishness–one of my surviving cultural heroes: a very funny man, a delightful comic, a fine character actor, and one of the top U.S. playwrights still writing these days; he has a new play in rehearsals in New York.
As I told him today when we talked for a few uninterrupted minutes, my daughter and I have been big fans since 1991, when we first saw My Dinner with Andre, a bona fide classic that he and Andre Gregory should have had AA nominations for. I told him that I’d even used the movie in my gr. 12 Academic Challenge class and that some of the students quite enjoyed it, which made him smile. (He is a very friendly, personable chap.)
I also asked about Andre Gregory who is not working with him in his current NY play, but who is hale and hearty and active, working on a book and doing artwork. He marvelled at his friend’s energy and creativity.
I gave him a list of favorite quotations from Andre, which he appreciated, and told him to take care and he said “Go well’ in that unmistakable voice. What a slice my afternoon with Wally was!

Typical of how I live and do things, when a special opportunity arises, regardless of expense, hassle (2 hrs. standing), and expense.

I know these opportunities won’t be there tomorrow.