No Promises to Keep 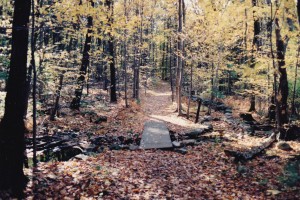 He had come to New England in the third quarter of his life, had come to where the October highway forked and he could see now that the road he was on curved left and was, in fact, the main thoroughfare through the valley. Although he had driven much of Massachussetts this long weekend, he was ready to try a side road.

In his mirror, he saw an approaching right road that disappeared into a grove of golden trees. When he was able to, he pulled the rented car over and watched the long line of cars behind him safely pass his. And when he turned off, he knew instantly that he had taken the right road after all.

He pulled over past the first stretch of trees where leaves thickly covered the road.
There was no sound of traffic although he could look back and see the highway ever busy with vehicles shining in the afternoon sun. Past the ditch on the other side across from him was a sleepy farm with mending wall. He wondered who chose to live here, wondered what this place might mean to the people who lived here with a proud red-flag mailbox at the end of their driveway. His buried life seemed far away now, quite irrelevant like a stack of accumulating, unmarked essays. The sky back in Alberta had been grey-white when he left it, half-expecting snow.

He drew in now and looked up for the Sunday sun moving without effort through the tall trees, or was it just leaf-heaven that sighed and moved this moment ever so slightly like his uncertain soul over a once-black road? He could not see more than fifty yards ahead from where he stood, but it hardly mattered. He wondered if the sidetrack could get any better. Hopeful, he got back in the car and drove farther along. The road continued rising gently, going up and up in a gradual succession of knolls and denser bush.

It was about this time he realized he was literally in another world–an obscure hamlet with a faded white nineteenth-century church. There were no stores, no modern encroachments anywhere, just houses tucked here and there like attitudes. No people anywhere. He began to feel the limits of his small car as it struggled up a long hill. The road gave way to mountain grade as his ears popped. Around him the trees retained their gold, now mixed with ferns and moss. On one side, he caught sight of a stream running down, joining the ditch on his right. In all his adult life, he had never seen such deep, significant colours. So lost and absorbed was he, that he had almost no time at all to react to the spooked deer–a doe–darting across in front of the startled car.

He pulled over at once, more aware of his breathing. He got out and leaned against the car, strangely dizzy from the suddeness of life springing momentously into his post-lunch consciousness.

Completely covered by leaves, the road itself could no longer be said to exist in any tangible way at this elevation. This many miles from the Interstate, it would take an act of imagination or faith to bring it back to life.

Acorns bounced ridiculously off the rental hood. He smoked now, slowly, and realized for the second time how distant everything was that had manacled his yearning fall soul like dead history. He thought again of the doe and wondered why it had chanced a death-dodge with a stranger. He stood now looking about as far as he could into the undergrowth where the green mixed freely with gold. His mind said `Wither?`and he gave the word voice. His feet felt too tired to walk now and he wasn`t sure if movement would make any difference.

This, then was the stillest, most perfect moment he had ever known. Like the moment after love, a shared solitude more real than the imagined cares of deadlines, airports, or other lives to lead. More real perhaps than the memory of lost youth or failed loves.
He felt the muses everywhere about him like the leaves that continued their never-ending randomly-scripted departures to earth. But there really was no point in trying to write any of this down, to take the time to think of words. He reached, instead, through the open car window and pulled out a camera. One picture, he thought. One moment before moving on. The shutter clicked. The only sound in the sacred silence.

Leaning back against the car to get his bearings, he breathed out, shivered, and zipped up his jacket. He felt the forest`s call now deep in his heart, knew in some strange way that he was no longer alone or would ever be lost again no matter which road he travelled. And some part of him would remain here forever by the side of a nameless road–a small part of an otherwise mapless journey, in the wisdom of this great, unexpected tranquillity.