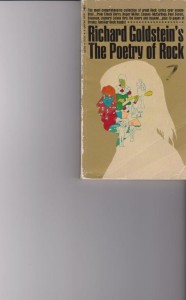 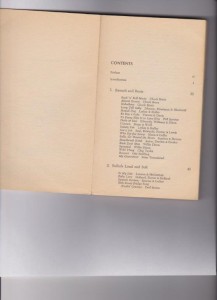 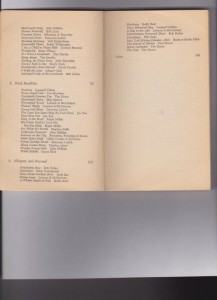 Table of Contents above. Many inspired choices including:

“Sad-Eyed Lady of the Lowlands”–Bob Dylan

“The Sound of Silence”–Simon & Garfunkle

These are all lyrics I would have typed up and mimeographed on class handouts that year.

Notes: Already in 1969, Dylan had established himself as The One whom everyone idolized and respected for his writing and imagery. Still active in live performances and recordings these days, Dylan remains The King of Twentieth Century Song Lyrics as well as The Supreme Poet of Folk and Folk-Rock.

On a personal note, I remember doing a winter, 1968 concert mostly of his material at a Silver Heights, Wpg. church with my folk trio which my school friends still remember. Later in 1978, I would do a concert of Dylan’s tunes at McNally High School in Edmonton with three students: a girl singer, a bass player, and a drummer, me on rhythm guitar.(see previous entry above)