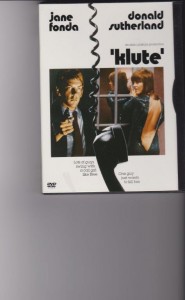 “There are little corners in everyone which were better off left alone.”

Klute is a classic thriller about three very different people engaged in a common search for identity. One is Bree (Jane Fonda in a remarkable Academy-winning performance), a nervous, insecure prostitute who is being stalked by an unremembered previous client. The second (Donald Sutherland) is the private detective who seeks to track down a longtime friend gone missing in a big city. The third is the enigmatic stalker himself who remains mysterious until the end of the film, despite his identity being revealed early on.

What makes this film special is its focus on the minefields of vulnerability, intimacy, and caring. Who can one trust when one has been exploited as much as the unstable Bree? Can people who are damaged ever recover and make lasting positive changes in their lives? How can she open to feeling ‘normally’ about a quiet stranger who is honest about everything and caringly protective of her?

The real protagonist of this film is obviously Bree, and she is laid bare to the viewer in quite a different way from her chosen work. She has aspirations to be a model or an actress and wants to improve herself, going to regular sessions with her ‘straight’ buddha-like female psychiatrist who says little as Bree, onion-like, peels her own way through monologues toward a clearer view of herself. Probably the most telling line is when she confesses a desire to go back to “the comfort of being numb again.” As things turn out, Bree holds the key to the other two male characters who mirror her and participate in their own separate, though related quests.

John Klute is a serious, determined friend of the missing man’s family who volunteers to find Tom and vindicate him of police charges of perverted harassment. He ends up learning more about himself in the process, his uptightness, and his own vulnerability and the unexpected need for someone else in his life. His natural instinct to do good and help others is the key that opens up his life even though Bree repeatedly rejects him and tries to destroy their developing connectedness.

The movie is named after him and in many ways he remains the most simple, yet fascinating character—caring for the woman who stubbornly tries to maintain rigid control over her own repressed feelings. Klute represents pure altruism and is the mysterious kind stranger that terrifies both the killer and his victim. He is the agent who initiates the action and centrally resolves the conflicts of the other two characters.

The third character is the sexual deviant lurking at the edge of ‘opening up’ in Klute. Like the other two characters, he too makes a breakthrough in understanding the price paid for repression and obsession. As he puts it in the dramatic climax, there are “sicknesses and weaknesses” that should never be exposed. Although there is the terrible price of numbness that Bree has paid for maintaining control over her clients, there is also a toll for the bogeyman of this piece who amasses four murders, to cover his essential sadism. A startling reminder of all the Jeffrey Dahlmers and Boston Stranglers of our modern world, he symbolizes, memorably, the potential dangers unleashed in the ever-apprehensive transaction of ‘opening up’.

In short, there may be reasons to let some devils remain locked up, though for many—the Brees and Klutes of the world—there are very good reasons to, as Bree puts it, “let it all hang out.” Klute exists to show us that opening up and trusting others who really care for us is a risky business at best. But that the resultant emotional growth and truly deep, personal benefits are far too great to go ignored or unheeded.