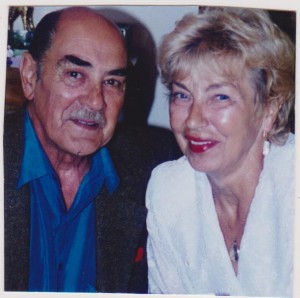 Del’s last Christmas was in 1997. He had been diagnosed with cancer in September that year and the cancer and treatments had started to obviously ‘waste’ him, something I became aware of when I was in Winnipeg that November. I drove the family the last week in December in -35 C across the prairies for them to be with him, for likely the last time as we all likely knew. He was very tired all the time and could not eat more than 2-3 mouthfuls, but he was in good spirits for the visit. In particular, he showed the kids my parents’ photo albums and various artifacts around the one-bedroom apartment. It seems like he could only do a couple of hours with us each day, he was that exhausted. However, we spent New Year’s Eve with them before we drove back home the following day.

Rose’s last Christmas was, nine years later, in 2006. (This time, we flew to be with her.) She was able to walk, slowly, three flights of stairs at that point so we were able to take her out for a drive in the rented van to see the city lights–something she really appreciated, even commenting that her pain had magically subsided. We also took her to Assiniboine Park to the zoo part where my dad’s bench and plaque were and cleaned the snow off for pictures. Special treats included a Chinese food supper one night and Rose dancing with her teenage grandson. Unlike Del, I don’t know that she felt this was the last time she would see the family, and we know that she had hoped to make it to my son’s wedding in the summer of 2007 (which sadly was not to be).

Amazingly, Del and Rose died on the same day/date March 31. He passed quickly in Winnipeg General after learning one morning that he would be going to a long-term care facility, not back home. She died quickly, within days, in the Riverview cancer facility after she was removed from home via ambulance. The decline was fast following her admission, after she realized and anxiously whispered to me “We forgot the cigarettes.”

They died within one hour of each other on that same day. There is a lot that is mystery and I don’t believe my mother was aware of dates or time for the last week before she drifted into the coma that led to her admission. But the irony and significance of their death dates and times did not escape me. My parents were that close.

Del and Rose were generally very happy people and inseparable in their retirement years. They were always quite active, walking miles to and from the park they loved each day. They did a lot of line and round dancing, and were snazzy dressers–formal and classy-looking. As you can see from the picture above they were vibrant, outgoing types. They enjoyed travel and considered themselves very fortunate for even the smallest of gifts. And they always looked out for those older and less fortunate than themselves, often befriending and visiting these people, even non-family members.

Gifts, company, family, kids, peace and joy aside, Christmas is also a time for reflection and perspective. Life and Christmas, in many ways, is simply presence and absence. And sometimes we get lucky–though one should never delay, especially when one has the intuition and opportunity (which, of course, was not there again for both these people the following Christmases). Del and Rose truly enjoyed those last Christmases as did I and the family. Those were special, unforgettable Christmases for all concerned, even for those–my remarkable parents–no longer present today. How they smiled and laughed those final visits. How grateful all were to be together, despite the schedules and geographical distance, even in those difficult, challenging, and obviously so sadder times.

March 31 is always a memorable day. But Christmas–those last Christmases is how and when I fondly remember Rose and Del. When they were last with the family they loved, at home, in their world.