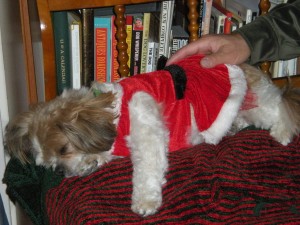 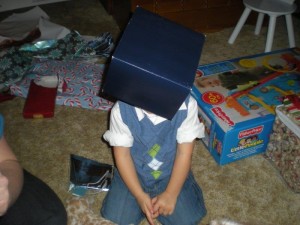 It was light outside this time when we got to Ganma and Ganpa’s. Grana had a camera as I walked with giraffe in my arms to him. Mama carried the dog in her Santa dress. Inside the big tree was still there with lights on, but there were no other people, just Ganma and Ganpa.

We went to the other room again and I saw puzzles on the floor and started to play with them. The deer were still moving outside but didn’t look as cold. The dog lay on the floor by herself and was eating a rope toy. We started to taking things out of some big stockings. I got a remote like the tv one at home except it looked like a train and made sounds like a phone. I was pretty busy some of the time throwing the rubber puzzle pieces into the hall like I do at home.

Then we moved into the room with the big tree and opened some more presents. There were some books about hugs and cars–which made noise. I got a colored phone which had a stick to play the ‘phone. I liked putting bows and tags on my head. I had more fun with a blue box which I put over my head and sat there in the middle of the room as the dog came to see me under the box to kiss me. She got tired though and lay down in her funny dress on a bench. I lay on the floor too sometimes, face down on my giraffe.

I waved Bye again by the cold door waiting to go outside to the car. I sure had fun my first Christmas.
…………………………………………….
Another piece about consciousness and its early beginnings relative to a special time of year. My grandson also kept walking into the ‘Tree Room’ and looking up at the tree as different-colored lights blinked on and off or ornaments moved. His favorite effect were ye olde bubble lights with the yellow fluid. “Bubbles” he said pretty clearly. There was definitely awe and wonder in many of his responses to what was going on. He also had his share of quiet moments in which I could sit him on my knee or hold him to point out different things. He is quite mimetic with words at this point, and occasionally launches into his own babble syntax to narrate his take on some things like the snowy candle town on an end table, punctuating his description with familiar words like “house’ and “tree” or “quack-quack” for the sound that penguins make!