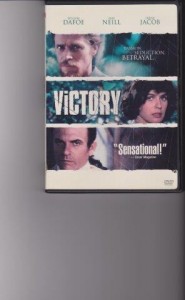 The plot of Conrad’s novel is interesting enough to form the basis of a movie which Mark Peploe wrote the screenplay for and directed. The movie is voice-overed by Davidson, a character in the novel who has occasional contact with protagonist Axel Heyst. Generally, he introduces the characters and conflicts and then returns toward the end to tie up the loose ends. Peploe skips the opening section of the book about Morrison, the coal mine co-owner that Heyst befriends, saves, and is thought to have murdered, and jumps to Heyst’s meeting with Lena (called Alma here).

Willem Dafoe makes a reasonably placid, self-controlled Heyst, Sam Neill plays Jones with a homosexual, drug-consuming twist, and Rufus Sewell steals the show as the edgy, weird, ‘loose-screw’ Conrad. Director Peploe uses a woman to play Alma/Lena’s part instead of a teenager (in the original) and this loses some of the conflicts and contrasts between the novel’s hero and heroine. (Irene Jacob’s nudity is a modern concession to heighten the suspense of the turning-point rape scene.) The script generally takes pains to follow details in Conrad’s book until the ending when a number of twists are added, that make the conclusion more bizarre. Only the hasty conclusion detracts somewhat from the minimal reflectiveness about the meaning of the dramatic tragedy.

The atmosphere of the film in the first half is relatively romantic and filmed with much light–a somewhat different atmosphere from Conrad’s more sombre book. However, the ending is suitably dark and nightmarish during the storm scenes. There is no way, of course, though, that the movie could ever capture the depth of feeling and conflict of its fictional counterpart; in this, the book was much ‘better’ as they say. Still, the movie version is worth taking in just to see how much a modern, independent European film could capture of the power, menace, and chaos that are expressed in Joseph Conrad’s underrated classic novel Victory.